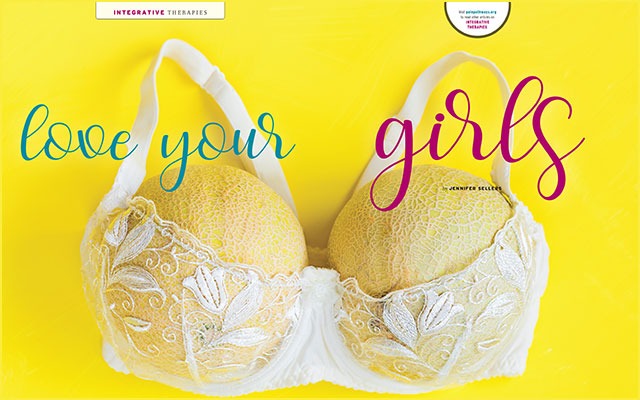 Joyce Sobotta started studying breast self-care more than a decade ago, after losing her sister to breast cancer in 2006. As a certified aromatherapist, she became interested in developing an essential oil for breast care. From there, she went on to study lymphatic massage so that she could educate women around the country on how to reduce breast pain and take better care of their breasts.

“I never knew what lymph was until I learned about my sister’s breast cancer,” says Sobotta, who is also a certified reflexologist. “The lymph picks up toxins and debris sloughed off by the blood, and it filters it through the lymph nodes, where it’s cleansed. Then it goes back into the circulatory system.

“I started learning how crucial it is for cleansing the body,” she continues. “I also learned that lymph needs [help] to move, because it doesn’t have its own mechanism to move. I found out that through manipulation and deep breathing from the diaphragm—and through exercise—you can keep the lymph moving and prevent it from getting congested around your breasts, which it is prone to do.”

Sobotta says that because the underarm and breast areas don’t move as much throughout the day as the limbs do, lymph does not pass through those parts of the body as freely. She says another major contributor to lymph stagnation in the breast region is compression from wearing bras and other tight-fitting garments.

“I oftentimes refer to the lymphatic system as a river,” she explains. “If the lymph is flowing well, the body is cleansing well. If a river runs clear, there’s no problem. But if a river is blocked, debris backs up. With congested lymph, that’s when you get pain in the breasts—when those toxins are backed up.”

It is for this reason, Sobotta says, that it’s important to manipulate the breasts manually through self-breast massage. “This keeps the lymph moving, and it is one of the best ways you can love your girls.”

After examining research that supports lymphatic breast massage and studying a number of practitioners who promote it, Sobotta learned that massage improves breast health and may even reduce breast pain simply by increasing the movement of lymph. Sobotta says she has experienced this herself and has known many other women who report similar results.

Sobotta is not a massage therapist; she’s an educator. Doctors nationwide have endorsed her work, and she has facilitated breast health programs for organizations like Susan G. Komen for the Cure, Alzheimer’s Association and Mayo Health System. She counsels women online through her website, and over the phone, on lymphatic breast massage.

In her experience, Sobatta has noticed that even women who are often open-minded about the practice might be a little hesitant about starting it. “I’ve had many women over the years say, ‘Oh my; I don’t think I can touch my breasts in that way!’” she says.

To introduce women to the concept of breast massage, Sobotta often suggests “fluffing.” Fluffing, she says, is simply bouncing and pushing the breasts up and down. It’s the simplest way to get lymph moving.

For a more thorough approach, Sobotta recommends a method she learned from a nurse, which starts by opening the lymph at the neck. To do this, stroke your fingers several times down from the ears to the top of the collarbone and then across, moving toward the center in 1-inch increments.

From there, gently stroke under the arms into the pit of the arm. She says that if there’s tenderness and pain there, it’s usually a sign of congestion. “I usually advise a woman to hold her fingers where there’s pain,” she says, because the touch will give a message to the lymph that it needs to move.

The last part—for fun and good measure, she says—is to finish the massage by going to the nipple and pressing it in. “I call this ‘beeping the horn,’” says Sobotta. “It usually causes a laugh, but in truth, there’s a lot of lymph around the nipple.”

Sobotta offers a lymphatic massage demonstration video on her website. She can also provide a brochure, if needed, or go over any questions on the phone.

Sobotta points out that the massage should always be gentle, because lymph lies just under the skin. And, really, that’s all it takes.

If a woman feels her breasts are too sore or painful to massage, Sobotta recommends any type of movement that feels comfortable. Even just holding the breasts and gently jostling them can be helpful.

“Just do whatever you can do at that time to get the lymph moving,” Sobotta says.

While self-massage is usually effective, Sobotta adds that certified lymph massage therapists may also be able to assist in lymphatic massage and drainage.

The Role of Essential Oils

Essentials oils are not only beneficial in aiding massage; they may also contribute to healthy breasts. Sobotta found this out when she started researching essential oils for a thermographer who asked her to create an oil specifically for breast health.

“I’m not a nurse, and I’m not a massage therapist, but aromatherapy is my specialty,” she says. “So I started doing a lot of research and combined that with the knowledge of essential oils I’ve had since 2002.”

Sobotta wanted to ensure every ingredient in the oil had a specific purpose toward promoting healthy breasts. After finding two different studies from the late 1990s showing that citrus oils may regress breast cancer, she started by combining orange oil with frankincense oil, which is believed to boost the immune system.

Sobotta also chose marjoram oil. “It’s called ‘joy of the mountains,’ so I thought that would be fun—because, whether the mountains are big or small, we love them all!” she jokes. “But it’s also a good oil to use because the herb marjoram helps release congestion.”

Sobotta then included rose, considered the love oil, because she believes it’s important for women to love their breasts. She also used the flower oils lavender and geranium, feel-good oils that can lift a woman’s spirits. Geranium also opens up the liver to discharge toxins.

“Ultimately, though, [geranium is] a woman’s oil,” says Sobotta. “It helps with balancing hormones and emotions. Considering that breast health concerns can worsen a woman’s state of mind, it’s a really helpful oil to include.”

Sobotta used her knowledge to balance out the oils in complementary ways, creating a proprietary blend known as Healthy Girls Breast Oil. She sells it nationally and overseas, wholesale or retail. Breast health advocate Dr. Véronique Desaulniers, better known as “Dr. V,” even referenced the oil in one of her books.

Loving Away the Pain

Sobotta recommends that women practice breast massage at least twice a day, though those who tend to have more breast pain may choose to massage more frequently. Even women who experience pain primarily during the premenstrual phase of their cycle can find it to be a great pain preventive, she says.

No matter what, says Sobotta, “the lymph needs to move every day.

“Do it daily as an act of self-love,” she advises. “It’s so important to your breast health to love your girls—and to love them just the way they are. I really believe that.”