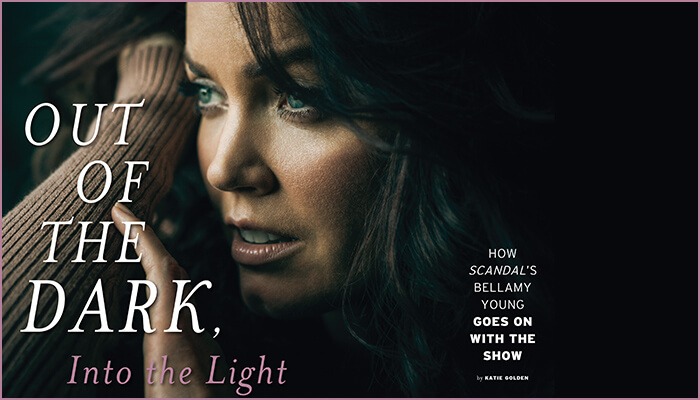 Eighteen-hour workdays, in inconsistent food schedules, cringe-worthy lighting, and intense emotional situations. This describes the daily production environment for TV star Bellamy Young, who plays Mellie Grant on the hit show Scandal. And she loves every minute of it.

Young, a native of North Carolina and a Yale alum, spent her post-college years working on Broadway, eventually landing leading roles. She then moved to Los Angeles in 2000, to try her finely honed craft on the big screen. After a decade in Hollywood, she landed Scandal’s role of the first lady. Her character was originally written into just three episodes, but she quickly became a fan favorite, and producers made her character a staple on the show. Now, in the upcoming sixth season, Mellie Grant may become president herself.

Discovering the Migraine Diagnosis
Dedication and sacrifice are part of an actor’s continuous fight to stay employed. However, Young has had to fight another battle in her personal life, making her successes no easy feat. Migraine attacks started plaguing her at an early age, but she had no idea what was happening. “I didn’t even know this thing called migraine existed. Growing up I never heard the word,” Young marvels.

Yet somehow she learned to stay quiet about the storms in her brain. She recognized early on there was a stigma surrounding those who have migraines. Too often people dismissed her symptoms, told her to take an aspirin, or assumed that her pain was “a lady issue.” Now Young says she wants to educate people and “keep the conversation going so we can get our lives back.”

As Young describes them, her migraine attacks start with the feeling of a hot poker in her left eye. Next, her peripheral vision disappears, as though she has blinders on. The attack morphs into a painful experience that affects not only the nerves in her scalp but makes her nauseated. The pain is so debilitating that her only respite is to stay in a dark, quiet room for days.

Young tends to get back-to-back migraine attacks for a month at a time. This happens on average three times a year. How is it possible to plan for excruciating pain during one-fourth of the year? How can one manage to keep up with a hectic schedule on an award-winning show with thoughts of another attack looming around the corner?

Understanding the Impact of Migraine
About one-third of those who suffer migraine are misdiagnosed, don’t seek a second opinion, and are forced to find a way to live with the pain. Young spent over 20 years with undiagnosed migraines. Although one out of every four households in America has a member who suffers from migraine, too many don’t understand how to get help or where to start.

Migraine plagues approximately 36 million Americans, more than multiple sclerosis, Parkinson’s disease, and ALS combined. Headaches that occur fewer than 15 days per month are referred to as episodic migraines, the category into which Young falls. Roughly 4 percent of the migraine population has 15 or more migraine days a month, defined as chronic migraine. That’s the same number of people who live in Los Angeles, roughly four million Americans. Most chronic migraine patients cannot hold a steady or traditional job.

Before Scandal, Young had a leading role in a Broadway musical during one of her roughest migraine spells. She recalls needing her understudy to take her place on many occasions. Young says she always had a dark cloud around her, scared of when the next attack would hit. Migraine can be very unpredictable, rearing its ugly head in the middle of a workday, right before a big event, or even disrupting a restful sleep.

Finding an Effective Medication
In her five seasons of playing Mellie Grant, Young has surprisingly never had a migraine stop production. “Migraines are an insurance risk,” Young explains. If she were unable to film even for a day, tens of thousands of dollars would be wasted. She doesn’t have time to sit out for days nursing her body back to normal after an attack. As they say, the show must go on.

Young credits her perfect attendance record with a medication she calls “my migraine friend.” Her “friend” is a medication called TREXIMET®. She always carries a supply with her, especially on set. When she feels that hot poker in her left eye, she stops whatever she’s doing to take a pill.

TREXIMET® is the only fixed-dose combination of sumatriptan and naproxen indicated to treat acute migraine attacks with or without aura in people 12 years of age and older. According to the National Headache Foundation, “triptans work by stimulating serotonin, a neurotransmitter found in the brain, to reduce inflammation and constrict blood vessels, thereby stopping the headache or migraine.” Young feels so fortunate to have found a medication that helps manage her migraine attacks that she is its spokesperson.

As long as she can take the pill before the tunnel vision begins, then the debilitating pain, nausea, and sensitivity to light and sound won’t manifest into a full-blown attack. She needs 20 to 30 minutes for the effects of the medication to take hold—then Bellamy Young can turn back into Mellie Grant and finish filming. When a migraine attack does occur on set, she praises the cast and crew of Scandal for being understanding and supportive of her need to take a short break before returning to finish work.

Taking Care of the Migraine Brain
Just as important as finding a medication that stops a migraine is understanding your triggers and listening to your body. Young knows that red wine, chocolate, and acidic food can trigger a migraine attack. Indulging in one of these items may not immediately cause a migraine, but over time those triggers stack on each other until her brain rebels.

RELATED: Headaches 101: What you need to know about headaches and migraine

“Our bodies send us messages. It will keep escalating until it’s heard. So take care of it early.” Young believes in a holistic lifestyle and practices meditation on a daily basis. “Meditation is a practice, not a destination,” she says. “It’s something you do with yourself and with the universe.” Meditation—just like acupuncture, yoga, and biofeedback—is considered an integrative therapy for chronic pain.

Young finds that migraine attacks put a strain on personal relationships. It can be tricky to navigate other people’s reactions to her illness. Some people want to share the odd home remedy their aunt or cousin swears by. Others have no sympathy, not understanding how a “headache” can hurt so much. This is why Young says it’s so important to take the issue “out of the dark and into the light.”

Combating the Migraine Stigma
As far as Young recalls, migraine has never been referenced on Scandal. With this realization, she earnestly says, “it’s something I’ll have to ask Shonda about.” She’s referring to Shonda Rhimes, the award-winning creator of Scandal as well as the medical drama Grey’s Anatomy and spin-off Private Practice, both shows that Young guest-starred in. Mentioning migraine in a TV show, in an accurate way, would be a large step in reducing the stigma that clouds this neurological disease.

What would her character Mellie Grant do to raise migraine awareness if she became president on Scandal? Young says she would probably say that those who have this disease are not seizing all of their opportunities to educate others. People need to know how much “it takes from our lives.”

Young thinks her character might also suggest that the migraine movement needs a famous face to openly discuss and educate the public. One might say that Young fits that bill. But on this topic Young can be reluctant. Her response is, “I am a very humble person who is just lucky enough to have a job on TV. If I can raise my voice a little … maybe we can get the ball rolling.”

A Migraine-Awareness Movement
Headache specialist, neurologist and advocate William Young, MD, of the Jefferson Headache Clinic in Philadelphia, similarly believes in promoting migraine advocacy and education. (Dr. Young has no relation to Bellamy Young.) A migraine-awareness movement has to grow from the ground up, he says. Migraine disease is the sixth leading cause of disability in the world, and yet stigma inhibits advocacy work. “History shows that almost all recent successful disease re-branding efforts have come through patient participatory movements,” observes Dr. Young. Patients need to get their families and friends involved as well.

Bellamy Young encourages people to have conversations with family and friends about the burden migraine puts on a person. She’s grateful to have found a medication that works for her. She no longer fears losing days or missing out on events. “It’s liberating to know migraine won’t get in the way.”