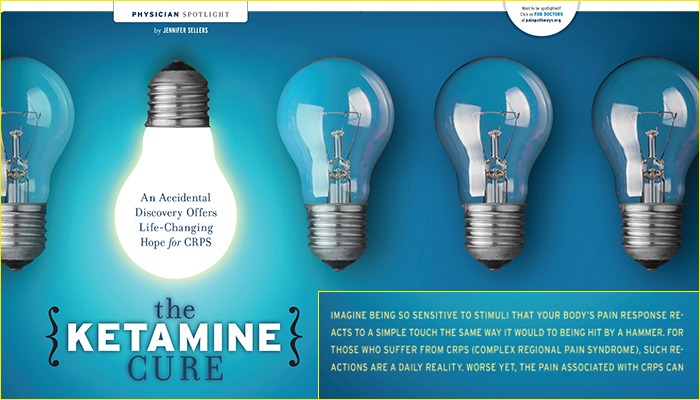 Imagine being so sensitive to stimuli that your body’s pain response reacts to a simple touch the same way it would to being hit by a hammer. For those who suffer from CRPS (complex regional pain syndrome), such reactions are a daily reality. Worse yet, the pain associated with CRPS can be difﬁcult to manage.

Fortunately, there is new hope for those who suffer from this condition. An anesthetic drug called ketamine is helping reduce and eliminate pain in some who have CRPS.

CRPS is a chronic pain condition that usually affects one of the body’s extremities (an arm, leg, hand or foot) and is caused by a malfunction in the nervous system, usually as the result of an injury.

Dr. North says this altered process can occur as the result of what most people consider a trivial injury, such as an ankle sprain, or following a surgical procedure. But there are also people who develop CRPS without ever having experienced an injury or trauma. Experts aren’t sure what makes some people more susceptible.

In addition to severe pain, symptoms of CRPS include:

•  Severe swelling of the painful limb

•  Shiny, blotchy or discolored skin in the affected area

•  Temperature changes in the skin in the affected area

•  Changes in nail or hair growth in the affected area

•  Changes in sweating patterns near the limb

•  Weakness, trembling, jerking or lack of coordination of the limb

•  Flare-ups when the above symptoms are worse than usual

In many people, these symptoms resolve or improve within a year or two, but in others the condition persists without relief.

Kelly Campbell of Gibsonia, Pennsylvania, and Tina McMasters of Browns Summit, North Carolina, are two such people. Both women were diagnosed with CRPS and have suffered excruciating pain for years.

“With CRPS, everyday life is impossible,” says Campbell, who has CRPS in her left arm. “Even the wind can feel like a sewing machine needle going into your skin.”

“I had medications, and I had nine nerve blocks,” says McMasters, who has CRPS in her right ankle and foot. “Over time, it felt like they were less and less effective.”

Until about 15 years ago, patients with unsuccessful management of CRPS pain had few options. However, an accidental discovery at a hospital in Germany led to an experimental treatment that is giving some CRPS patients their lives back.

At the German hospital, a man was admitted with pain so horrible that nothing the doctors tried could reduce it. Not knowing what else to do, they gave him anesthesia to put him to sleep for a few days. When he emerged ﬁve or six days later, his pain was dramatically improved. One of the anesthetic drugs the doctors used was ketamine.

Ketamine is usually paired with other anesthetic drugs because, on its own and in small doses, it doesn’t induce unconsciousness. It does, however, reduce pain. “Ketamine is very effective at reversing the number and sensitivity of AMPA and NMDA, the nerve receptors that increase the reception of neurotransmitters,” explains Dr. North.

Ketamine is a relatively safe anesthetic. Unlike morphine or propofol, it does not slow breathing or interfere with airway reﬂexes or slow breathing. It does, however, tend to produce psychotropic side effects—most notably, bizarre dreams, hallucinations and abstract thoughts. These side effects can be counteracted with accompanying sedatives, such as Valium. Ketamine can also cause nausea and temporarily increase blood pressure, heart rate and salivation.

Still, the potential beneﬁts of the therapy often out-weigh the side effects. Because ketamine is such a promising treatment for CRPS patients, researchers in the United States began studies to replicate the German hospital’s results.

Robert J. Schwartzman, MD, chairman of neurology, at Drexel University in Philadelphia, is a lead researcher in ketamine therapy. That’s who Dr. North called when he wanted to help a patient who was running out of options. “I got involved when I had a patient who had undergone every pain intervention I could think of,” says Dr. North. “We tried spinal cord stimulation, an intrathecal pump and even experimental drugs. Nothing helped, and her arm was so swollen it was oozing; amputation was becoming a real possibility.

“I researched the ketamine studies and then called Dr. Schwartzman about enrolling my patient in his trial,” continues Dr. North. “But because it was a randomized control study with placebos, there was a 50/50 chance she wouldn’t receive the ketamine. Dr. Schwartzman and I discussed the treatment process in depth, then talked it over with the patient, and she was ready to try it.”

Three to four days into his patient’s treatment, there was still no relief in sight. “By day ﬁve, I was really doubtful, so I told the patient I was going to draw the line at seven days,” says Dr. North. “The next day, when I walked into her hospital room I saw that her arm had shrunk down and her dad was cutting her ﬁngernails for the ﬁrst time in almost four years—and, she was in almost no pain. She was crying, her dad was crying, I started crying … The change was profound, so I started offering ketamine as an option to more patients.”

Campbell experienced similarly miraculous results. After years of visiting specialists across the country to ﬁnd an effective treatment for her CRPS pain, she was referred to Dr. North. Campbell says she knew about the ketamine option and had asked the doctors she visited about the option, but no one was willing to try it.

“A business associate of my dad’s had a daughter who also had CRPS,” says Campbell. “Before she started the ketamine treatment, she was in a wheelchair; when she ﬁnished it, she walked out of the hospital on her own two legs. That convinced me. Now, after ﬁnishing the treatment, I feel like I have my life back. My only regret is that I didn’t pursue it sooner.”

Not every person who undergoes ketamine therapy has such dramatic results.

“The results I’ve seen seem to be divided in quarters,” says Dr. North. “About a quarter of my patients who receive ketamine have a great response and the pain doesn’t come back. The next two quarters are made up of people who have tremendous initial pain improvement with returning pain, and those who need maintenance doses to treat ﬂare-ups. The ﬁnal quarter is comprised of nonresponders.”

Those who have their pain return, or who experience occasional ﬂare-ups, can get ketamine booster infusions to control their remaining pain. This is something McMasters has had to do, but she says she’s still pleased with the overall outcome. “I have ﬂare-ups, but the intensity is nowhere near what it was before,” she says. “Plus, the pain relief has lasted longer than any other treatment I’ve tried; I no longer have to take hydrocodone.”

There are some predictors of how a person will respond to ketamine therapy, says Dr. North. “I found out early on that it doesn’t work as effectively in patients who are on opiate therapy,” he says. “Opiates tend to up-regulate the receptors we’re trying to down-regulate. As a result, the opiates are almost ﬁghting the ketamine. So, if someone is interested in pursuing ketamine therapy, they need to discontinue opiate use and remain off all opioids for six weeks prior to the ketamine therapy.

WHICH KETAMINE THERAPY IS BEST?

If there are temporary side effects during ketamine therapy, such as unusual dreams and hallucinations and increased blood pressure and heart rate, they can usually be managed with medication.

The primary risks with inpatient ketamine therapy are those associated with any procedure performed in a hospital setting; while unlikely, they include increased risk of infections and blood clots.

Perhaps the biggest challenge associated with ketamine therapy is ﬁnding a physician who performs it. While the treatment has shown a great deal of promise in the management or correction of CRPS, it’s still not a common therapy.

Dr. North has been offering the service for a decade, and has treated around 130 patients during that time. However, many of his patients have come from all over the country, unable to ﬁnd providers in their own region who will offer ketamine.

Dr. North estimates that only about 20 health care facilities across the country provide ketamine therapy, and of that number, only ﬁve or six offer inpatient therapy. He attributes the scarcity to a number of factors, including time and cost commitments for physicians. Physicians must be willing and available to monitor patients around the clock for seven to ten days, which is an enormous personal undertaking.

Many health insurance companies cover some or all of the treatment. However, patients should call their insurance companies to verify coverage ahead of time. Dr. North also suggests patients receive a thorough evaluation from a pain physician as well. “When it comes to ketamine therapy, the patient needs to have a clear-cut diagnosis of CRPS in a speciﬁc limb or extremity,” he says. “There are some patients who have similar disorders or ‘whole-body’ CRPS, but those are not qualifying diagnoses for ketamine therapy.”

For good candidates, the search for a provider may be well worth the effort. McMasters says undergoing ketamine therapy is one of the best decisions she ever made. “I’ve gotten more relief from this than anything I’ve ever tried,” she says. “The pain kept me up at night, but now I can sleep.”

Campbell feels similarly. “After my ketamine therapy, I walked out of the hospital and enjoyed the feeling of wind on my arm for the ﬁrst time in years—it gave me tears of joy,” she remembers. “This past Christmas, I attended my nephew’s play and was able to clap both of my hands instead of having to slap one hand against my knee. It’s all of those small things you regain that mean so much. I lived a blessed life before, but now I feel I’m back to the real Kelly.”