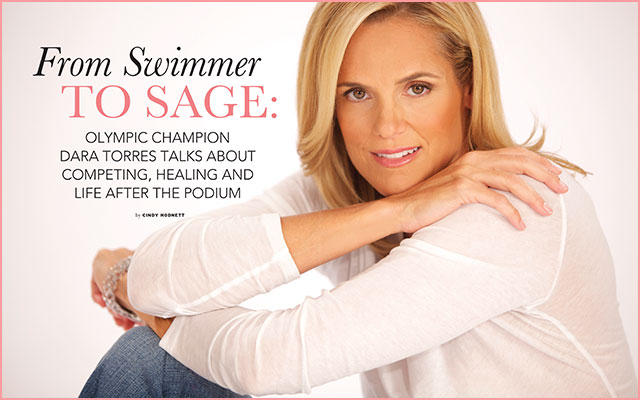 “Age is just a number”—and no one demonstrates that more than 12-time Olympic medalist Dara Torres, who has spent decades proving the adage that eventually became the title of her 2009 inspirational memoir about fitness, aging and pursuing dreams.

Described by many as the fastest female swimmer in America, Torres began competing in the Olympics in 1984 as a teenager. Nearly 25 years later, she became the oldest swimmer to compete in the Games, taking home three silver medals from Beijing in 2008 and becoming a crowd favorite for both her achievements and her gracious demeanor on and off the podium.

“I’m very competitive, and I wanted to show that you don’t have to put an age limit on your dreams,” Torres says. “Nobody thought a mom could compete with the best swimmers in the world at that time, and I challenged that stigma. I love swimming, and ultimately I still longed for the competition.”

Following her accomplishments in Beijing, Torres took 16 months off for major surgery on her left knee. After she developed a significant limp that severely limited her flexibility, she began looking for answers and a treatment that would allow her to resume her physical activity and fitness routine.

“The first time I started feeling pain in my knee was around January of 2008,” Torres says. “There wasn’t one main cause—it was really just a result of my cross-training regimen in the water and on dry land that was tearing up my knee. I went from a grade 1 to a grade 4 cartilage loss in my knee in one month.

“We immediately started looking into ways to rehab my knee,” she continues. “We thought if I started biking it would build muscle in my VMO [vastus medialis oblique muscle] below the quad. All it did was make my knee worse. I was also going to regular physical therapy sessions to address the issue, but nothing seemed to be working.”

“It changed the way I trained completely,” she recalls. “I couldn’t do any kicking on my stomach. I did all my bending exercises and extended leg kicks on my back—and any exercises where my knee was over my foot were out. Outside of the pool, I couldn’t run, couldn’t ride a bike and had limited movement in my knee even just around the house.”

The autologous chondrocyte implantation surgery was ultimately successful, improving Torres’s flexibility, eliminating her limp and prompting her to return to training and try out for the 2012 US Olympic swim team. Her qualifying time fell short by a fraction of a second, but Torres inspired millions with her determination and grit. And while her attempt was unsuccessful, she considers her total Olympic career—medals and losses—an important part of her story.

When asked what she hopes her legacy will be, her mind goes straight to her daughter. “Having my daughter there [in Beijing] was very special. Showing that you don’t have to put an age limit on your dreams is something I hope she and others take with them as they strive for their own dreams and goals. You have to follow your heart.”

Life after the Olympics

Now in her 50s, Torres’s roles include those of author, commentator and, of course, mom. She has appeared on shows including Good Morning America, TODAY, Piers Morgan Tonight, Fox News, ESPN and CNN, and Sports Illustrated named her one of the “Top Female Athletes of the Decade.” Her 2009 memoir, Age Is Just a Number: Achieve Your Dreams at Any Stage in Your Life, became a best-seller, as is her second book, Gold Medal Fitness: A Revolutionary 5-Week Program, published in 2010. And while she frequently focuses on health, fitness and achievement in her speaking engagements and inspirational books, Torres also offers advice to pain patients based on her own personal experiences.

“Go see your doctor immediately” when you notice an issue, she advises. “I thought biking and doing more physical therapy was going to help get my knee back to full strength quicker, but it only made it worse. You have to diagnose the problem before you try to correct it.”

These days she’s still healing from a 2017 matrix-induced autologous chondrocyte (MACI) surgery, a procedure that treats cartilage defects of the knee by implanting the patient’s own healthy cartilage cells into the defective area of the knee. Torres says she’s “still trying to take it slow and follow the post-surgery protocol to make sure I’m not overworking my knee or doing anything that’s going to hurt the transplant.

“They inserted new cartilage all over my kneecap, and the MACI surgery was a huge success,” she explains. “These days I’m finally able to stand on the bike and am participating in Bar Method classes.”

Torres is a co-owner of The Bar Method location in Wellesley, Massachusetts, and is studying to be an instructor. She says she is also looking into opportunities to create a line of supplements, and is spending much of her time as a motivational speaker for large corporations, organizations and nonprofits, talking about her experience as an Olympian and about athletes making history now. Her myriad professional commitments keep her on the go, but in rare free moments, Torres says she spends her time enjoying everyday activities like caring for her daughter and exercising.

“I am always impressed by different things that each athlete does well and how they’ve found their own strategy that works for them—things like their work ethic and how they are with their fans,” she says. “I think mentoring is important, and being able to give back and not just make it all about themselves.”

She adds that even though she hasn’t competed on the Olympics stage in several years, she remains dedicated to and inspired by the games.

“It’s definitely very different for me to be a spectator and not a participant,” Torres says. “I was actually working in radio broadcast for the last one in 2016 and got to see the action live. Everyone looks at these athletes and is so amazed at what they do, but I understand what they’ve gone through to get there. I admire and appreciate what they do to be the best they can be.”