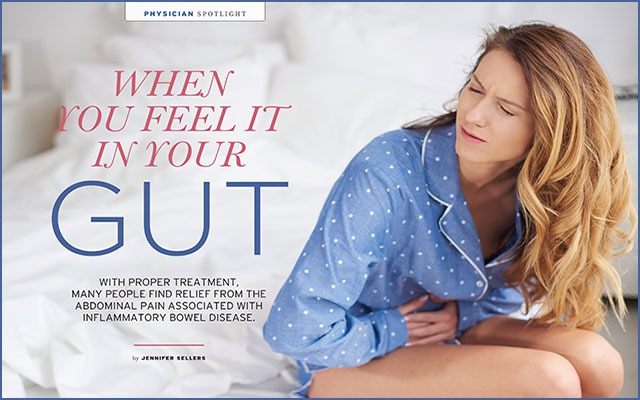 Abdominal pain can be easy to rationalize away—at least at ﬁrst. You chalk it up to “just gas.” Or maybe stress. Or possibly something you ate. But when the pain becomes chronic, it could be a sign that you’re dealing with something more serious, like inflammatory bowel disease (IBD).

Ulcerative colitis and Crohn’s disease are the two primary types of IBD, but IBD is typically viewed as a spectrum of diseases. “On one end there’s typical ulcerative colitis, and on the other end is typical Crohn’s, but there tend to be a lot of cases in the middle,” says Richard Bloomfeld, MD, professor of medicine in the section of gastroenterology at Wake Forest University School of Medicine and director of inflammatory bowel disease at Wake Forest Baptist Health.

The inflammation associated with ulcerative colitis most commonly occurs in the colon, whereas Crohn’s disease tends to cause inflammation in the small intestine, although it can occur anywhere in the gastrointestinal (GI) tract. The most common symptoms of IBD are diarrhea and abdominal pain and cramping.

While IBD mostly affects the gut, it’s a systemic disease that can be felt outside the GI tract. In fact, people with IBD often deal with joint pain and back pain as well. “It’s a disease that can affect your entire system and make you feel bad all over,” says Dr. Bloomfeld.

Experts still do not completely understand IBD. While it presents similarly to an autoimmune disease, it’s slightly different. Dr. Bloomfeld says it’s better described as an immune disturbance or an immune-mediated disease. “In an autoimmune disease, we know the immune system is attacking cells,” he explains. “In IBD, it’s clear there’s an overactive immune response, but it’s not clear what the target is.”

One theory is that, in IBD, the immune system is attacking the contents of the GI tract, such as waste and bacteria.

RELATED: IBS…The Truth About The Trouble Down Under

Typical ulcerative colitis and Crohn’s disease produce abdominal pain that comes and goes and varies in intensity. The most effective way to treat the pain of IBD is to treat the underlying disease.

“The key to managing IBD symptoms is in controlling the inflammation that’s causing them,” says Dr. Bloomfeld. “It’s impossible to mask the symptoms without addressing the underlying condition.”

There are a number of medication options for treating IBD. Some are more effective but with a higher risk of side effects, while others are less effective with less risk.

Gastroenterologists determine a treatment course based on an individual’s risk factors and current disease state. “It’s important to determine if the disease is active enough to take the risk of more aggressive therapies,” says Dr. Bloomfeld. “And we always discuss with patients the risks and benefits of each therapy to find out if they’re willing to accept the risk of potentially serious side effects in order to better treat their disease. If someone has a milder form of the disease, they may continue a first-line treatment—even though it doesn’t lead to total remission—so that they can avoid the risks and costs of other therapies.”

Dr. Bloomfeld also says that although there are limited options to treat IBD at this time, new therapies are in the pipeline. In the coming years, those who suffer from ulcerative colitis or Crohn’s disease should have more treatment options.

Ideally, the ultimate goal of IBD treatments is to help patients achieve remission of the disease—both clinical remission and endoscopic remission. “Clinical remission occurs when the patient feels well, has normal GI function and is able to lead a normal life,” says Dr. Bloomfeld. “Endoscopic remission is when the mucous tissue lining the digestive tract is also healed. This stage of remission is most desirable because it can prevent complications from the disease over time.”

While typical IBD comes with its share of discomfort, complications can lead to even more intense pain. “In Crohn’s, some people develop a penetrating disease,” explains Dr. Bloomfeld. “That means the inflammation goes through the wall and causes an abscess (a pocket of pus) or a fistula (two things connecting that aren’t supposed to, like the small intestine and bladder, or the rectum and vagina). Another complication is when the inflammation scars and narrows the GI tract, creating obstructions. These kinds of complications can lead to severe pain.”

Treating IBD early and aggressively is the best way to prevent complications.

As Dr. Bloomfeld explains, the top way to treat IBD-related pain is to treat the disease itself. In those who are experiencing complications of IBD, additional pain treatment may sometimes be necessary.

“In some patients, especially those with Crohn’s disease, there is tissue damage; the inflammation is controlled, but we can’t make the damage go away,” explains Dr. Bloomfeld. “Some of those patients may be left with chronic pain. That is the point when I suggest the patient also work with a pain-management specialist—when the inflammation is optimally controlled with medical therapy, but there is additional pain that needs to be addressed.”

Dr. Bloomfeld cautions patients not to self-treat IBD with over-the-counter NSAIDs (nonsteroidal anti-inflammatory drugs), like Advil, Aleve or Motrin, as they can make IBD worse.

“In most cases, you don’t have to seek additional medications to treat the abdominal pain that comes with IBD,” he says. “We work hard to treat the underlying disease, and in most people that will control the pain symptoms.”